Its dangerous to be a kid these days.

I was speaking with a friend earlier about a photo we had seen where an engaged couple had their announcement as a scene of them being attacked and overcoming a Zombie.  My friend said, "their children are going to think they're wierd"  To which I replied "Yes, but one day they will see them as cool"  My friend thinking of her children' lamented that she lives for the eventual day her children will come to that revelation.

I assured her that they would-- after she had died.

Because of the desire to maintain coolness status-- or maybe more to prove it,  parents progress from latest technological trend to the next.  As long as they know their Facebooks from their instagrams from their Vines, then they're good. (and whatever  else there may be, I don't have the need to connect any more to the internets more than I already have) And who gets to suffer--er I mean benefit from their self assertion of their relevance?  their children..  While a lot of parents are prone to upload and post some of the most unflattering images of their young charges (thus leveling the coolness playing field)  Im thankful that my friends practice self restraint.

Of course she was portraying her child as a wheeler dealer, but all I could think of was "yeah, right kid, you're the one who's going to suffer for want of a hair comb, not your mom. You think candy is worth your self esteem? Guess again!

The saying goes, A picture paints a thousand words.... So here's the words I painted. 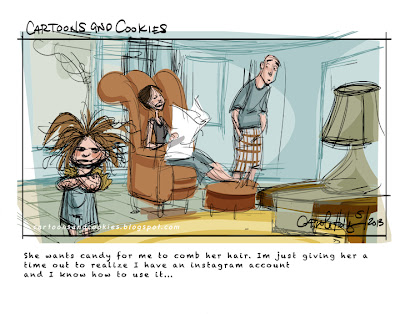 Would a White Tussock Moth Eat Abercrombie and Fitch?

If only I had known in HS that I would have grown up to now be as cool as I am--or at least not care that I am not as cool as others think I should be--I would have been better off having fun and waiting around for my shy speechless friends to eventually find me. But at any rate, my new acquaintance is quite cool as well--who knows, she too might not have been cool in high school.... But now she's not in High school or any school for that matter as he's traveling the US in an airstream trailer.  Well, just recently she posted on Facebook a picture of an adorable fuzzy little wormy thing with a red head and giant antennae.  It reminded me of something from a children's book.Over the next day she posted more pictures of them.  they were everywhere. I told her to sleep with one eye open. She wrote

"You can HEAR THEM FALLING FROM THE TREES. It's gone from cute to sixties horror flick."

It turns out they are the larval stage of the White Tussoc Moth.  Someone said

"This is about as fantastic as they will ever look."

Hmm... kind of like a super cool person who peeks in Highschool.... but I guess its always back to that isn't it?

Dancing on The Head of A Heavenly Pin

Unless they are spectacular-we can be inured to people's testimonies. But that belies how little we understand that all sin no matter how great or small is the same. More than that, how amazing the love of God truly is! But one need only look to the angels to understand just what happens when both mass murderer and kindly grandmother repent "In the same way, I tell you, there is joy in the presence of the angels of God over one sinner who repents." Luke 15:10 for it is not just that a sinner turned from their wicked ways to serve a loving Savior-- its that a loving Savior opens His arms wide to receive a wicked sinner. God did not have to forgive any of us-- and yet, every time He does, the angels rejoice because He demonstrates His tremendous mercy! Salvation in a sense is not about us-- oh we get the benefits-- but really, its all about God 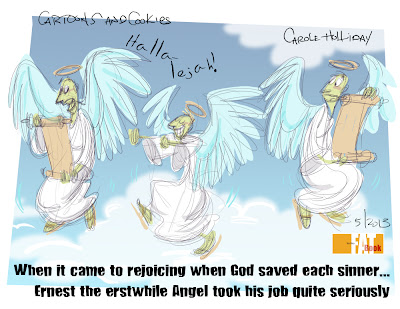