Have You No Impulse Control?

Of course not, Im a baby, idiot.

I stayed with a family member over the weekend and their children are gorgeous sweet and lovable moppets... mostly.  but there are times--

like when the fire hose won't wind properly on the firetruck all the four year old could do was stand in the front yard and shriek at the top of his lungs as if someone had cut of his arm and stir fried it and then fed it to him.

the mom who had been in another room came in and asked the father what was the story and he explained it in that tired voice that fathers get who have actually forgotten "oh yeah, one of my progeny's standing outside screaming at the top of his lungs--"

I was talking to another friend about her three year old and she said that most times he's such a love, and then there are times-- well she just had to remind herself that his frontal lobe was not developed yet so he lacked the ability to control those emotions.

Really? I said.  wow... so my pleas to children to act reasonable were not ignored, they actually had no capability of complying... hmmm...

My friend went on to say, yes, its in those times I remind myself of that fact, remember his adorable times and just figure I have to ride it out.

So my cousin was right.

for my friend who wrote

"So it's Bite, Scratch, and Scream Day? OK, then. If you need me, I'll be hiding under the desk." 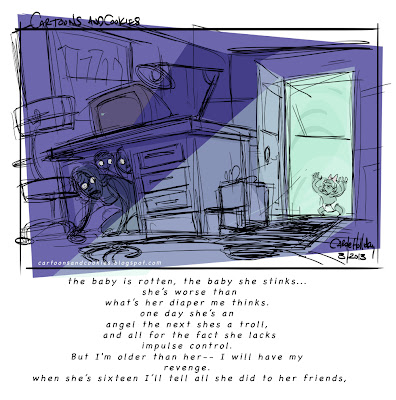